One of the key details of creating shaders in the ISF specification is that they can be used in host applications as generators, effects and transitions. While an individual composition can be a lot of fun on its own, the real power of ISF comes from being able to include them as smaller re-usable elements in larger projects.

In this chapter we will look at:

For the most part while reading this book you can use the provided code editing section, you may find it useful to work with one of the other available methods, as these will be the tools you will later use to write ISF compositions to load into other software or publish online. 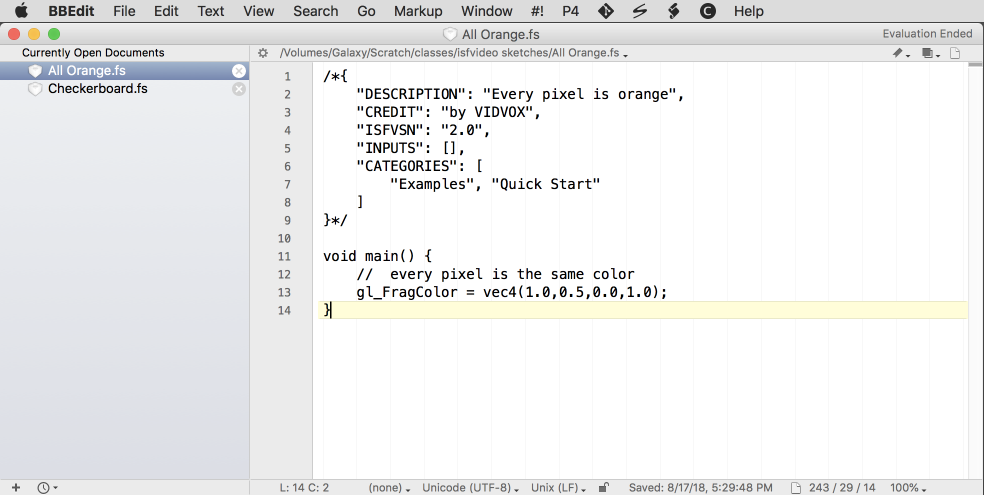 You can write and edit shader files using most standard text editors. When using a text editor:

ISF files can be created, viewed and shared online at the isf.video website. These are some of its basic features:

# The ISF Editor for Mac and Windows

A free ISF Editor for Mac and Windows is available here: ISF Editor.app.zip.

These are some of its basic features:

ISF compositions can be used in a variety of different host applications. In this section we will briefly look at how ISF works in a few different pieces of software, but for detailed information you may want to consult with the corresponding documentation provided by the developer. 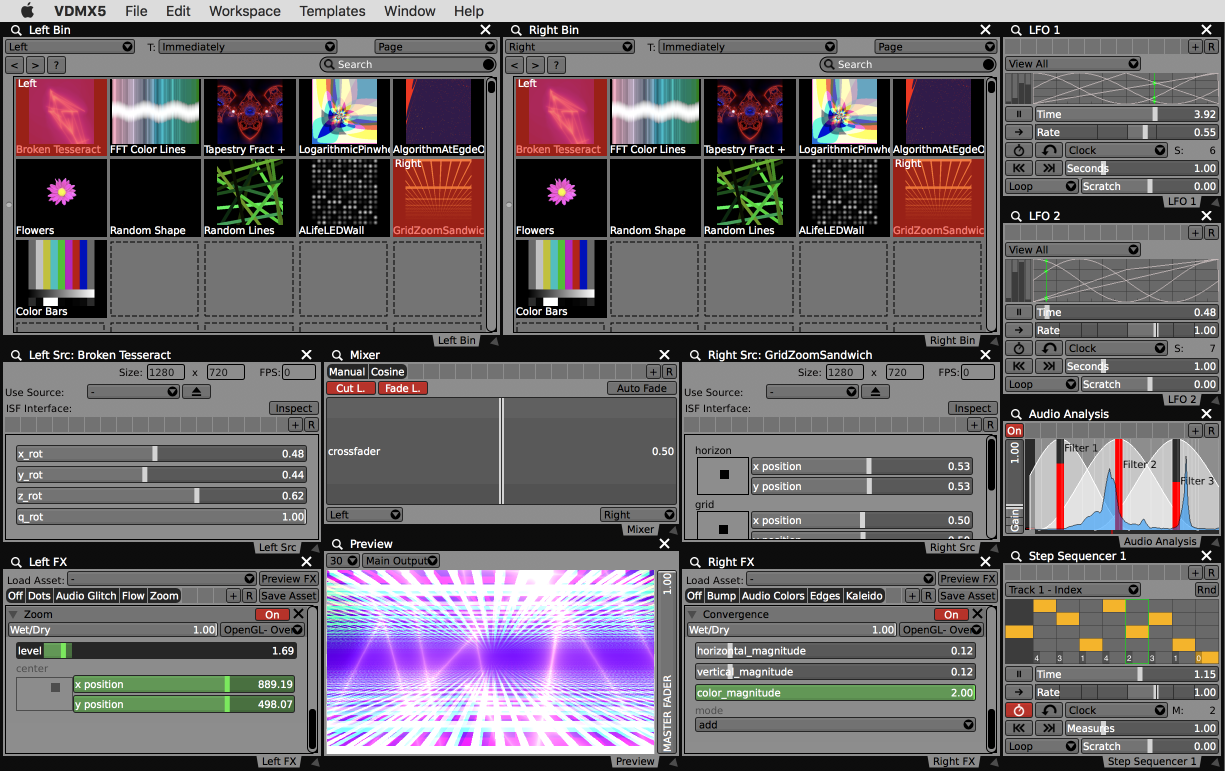 The ISF specification was originally designed for use in VDMX and is a fitting first example.

ISF compositions installed in the global directories are automatically detected and included as available assets in the appropriate place:

Additionally, ISF Generators that are located in other directories on your computer can be directly loaded into media bin pages by dragging from the Finder or using the Media Browser window.

Whether being used as a generator or FX any elements specified in the INPUTS for the ISF composition will be available as user interface controls. For example, inputs of type "float" appear as sliders, "bools" will appear as toggle buttons, and "colors" will appear as color pickers. The exception to this is when using "inputImage" to declare an FX, as this element is used to pass the incoming layer image into the shader.

For an example of using audio waveforms and FFTs see the VDMX tutorial on visualizing audio fft and waveforms.

Additional tutorials on using ISF in VDMX can be found on the VDMX Tutorials Site.

# ISF for Motion and FCP X

One of the interesting ways to take advantage of using GLSL shaders is for non-realtime use when creating motion graphics and editing video. This can be especially useful for rendering out complex shaders at high resolutions and frame rates.

The ISF for Motion and FCP X add-on includes the standard set of ISF 200+ generators, filters, and transitions and the ability to use your own creations.

Here are links to websites of a few different other softwares that support the ISF specification:

For a full listing of software that supports ISF, visit the supported software section of the ISF homepage. 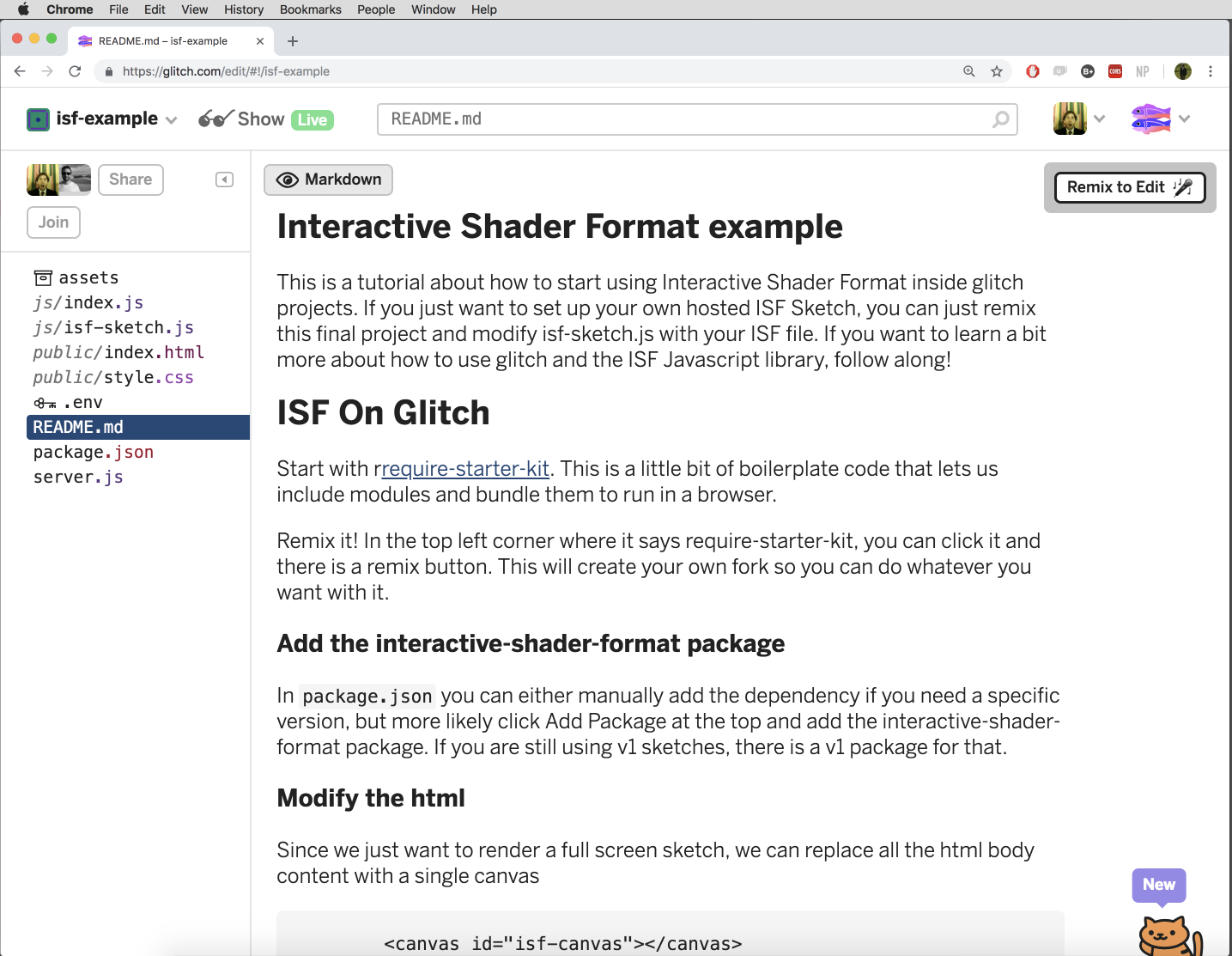 The interactive-shader-format-js project includes code for loading and rendering ISF compositions as part of a WebGL pipeline.

Developers interested in working with ISF files on a code level can take advantage of several existing libraries, frameworks and example projects.

More resources for adding support for ISF to your own software, along with add-ons for various creative code environments, can be found in the developers section of the ISF website.

← The Anatomy of an ISF Data Types, Standard Variables and Functions →