# Introduction to the ISF Quick Start

If you are already somewhat familiar with programming, this quick start guide is a quick way to learn the basics of creating GLSL shaders to meet the ISF specification. Shaders written in the Interactive Shader Format, also known as ISF, can be used as visual generators, effects and transitions in supported software.

For a more in depth lessons on learning GLSL and ISF you can read the ISF Primer. Additionally the ISF Reference Pages are a useful set of documents to keep on hand when writing and remixing ISF compositions. Developers interested in supporting ISF in their own software can visit the ISF Specification Page for detailed information and links to useful sample code.

Finally, the ISF Test/Tutorial filters contains many useful test ISF compositions that are useful references and the standard set of shaders that we include with VDMX can be found in the ISF Files repository on GitHub.

In this document we will cover the basics of using and writing shaders in ISF. 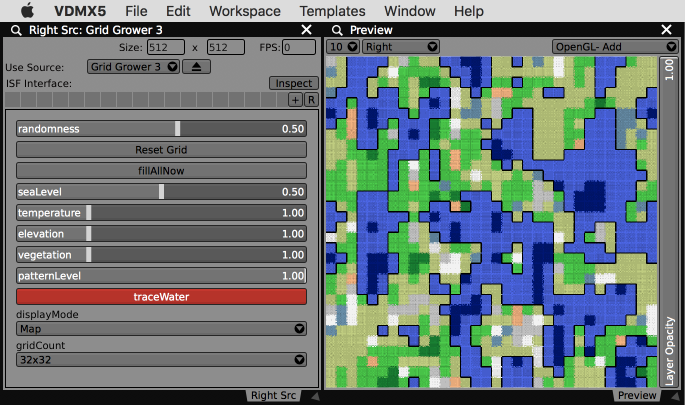 ISF composition being used as a source file in VDMX.

Additional discussion and examples can be found in the ISF Primer chapter on using ISF Compositions.

You can create ISF compositions using a variety of different tools:

Every pixel is orange example in the ISF Editor.

To create your first ISF composition, open the tool of your choice, create a new file and save it with the title "All Orange.fs".

In this case the ".fs" file extension stands for "fragment shader" which is the particular type of shader we will be writing for this first example.

Copy and paste the following code into the text editor area and then save the document. If you are working one of the live updating apps, your output should render a solid orange color. If you are working in a text editor, you should be able to load the "myshader.fs" into the host application of your choice as a generator file.

This ISF composition is made up of two parts - a JSON blob at the top that describes the shader and below that is section of GLSL code. The contents will vary but every ISF composition you create will have these two things in a .fs file.

From this starting point, you can replace the contents of the void main() {} function with other code and set gl_FragColor to any other color. With GLSL, the code in this function will execute simultaneously for every single pixel in your image.

This is further detailed in the ISF Primer chapter on the anatomy of an ISF composition.

Within the ISF specification, there are several useful uniforms that are always available to use within your shaders.

A few of the most important automatic uniforms in ISF are:

The output of this example should vary red over the x-axis and green over the y-axis. While not particularly interesting, rendering the coordinate space in this fashion is often useful in debugging more complicated shaders.

In the ISF References Pages you can find a list of automatic uniforms in ISF and built-in functions.

Next create another shader called "Timed Animation.fs" and paste in the following code:

This code uses the TIME uniform variable to animate the output. When the x position of the current coordinate is less than the fraction part of the time in sections the image is filled in with our color, otherwise the pixel is transparent.

Further discussion and examples can be found in the ISF Primer chapter on automatically created uniform variables.

Adding inputs in the ISF Editor.

One of the most powerful aspects of ISF is the ability to declare uniform variables such that a host application can automatically create the appropriate interface input controls. For example a float type is typically represented as a slider or knob, whereas a bool would be represented by an on / off toggle button.

Going back to our first example, we could add a single uniform variable to this by adding the INPUTS attribute to the JSON section.

You can either create a new shader for this, or modify the "myshader.fs" that you've already started.

Looking in the INPUTS section, there is a single element with several attributes. The two that are required here are NAME and TYPE which are set to "level" and "float" respectively.

Now instead of the "float" option for TYPE, try this code which uses the "color" option which provides a vec4 uniform variable.

The ISF JSON Reference contains a detailed listing of the various supported input types and attributes which includes conventions for passing in both scalar types like float and bool, vector types like vec2 (for points) and vec4 (for colors), and special types like image and audio data.

Further discussion and examples can be found in the ISF Primer chapter on the anatomy of an ISF composition.

Adding an image input in the ISF Editor to create an FX.

Part of the ISF specification is a convention for declaring compositions as effects filters which are meant to process incoming image data. This is accomplished by including an input with the TYPE set to "image" and setting the NAME to "inputImage".

Create a new shader and save it with the name "firstFX.fs".

As an important note, if you are on a Mac, be sure to save this file to the "~/Library/Graphics/ISF" directory if you would like this effect to be available to host application software. In the ISF Editor for Mac there is a button in the interface to quickly navigate the browser to this directory.

Now copy and paste the following code into your editor and save the file:

ISF compositions can include more than one image input, making it possible to pass in additional data to be used for things like masking and distortion effects. Additional information on declaring image inputs and the image filter convention can be found in the ISF JSON Reference.

Though not required, ISF allows for compositions to include an optional vertex shader. This can be useful when creating compositions that make use of pixel look up for convolution kernels or other operations that are best applied as vertex manipulation stage. 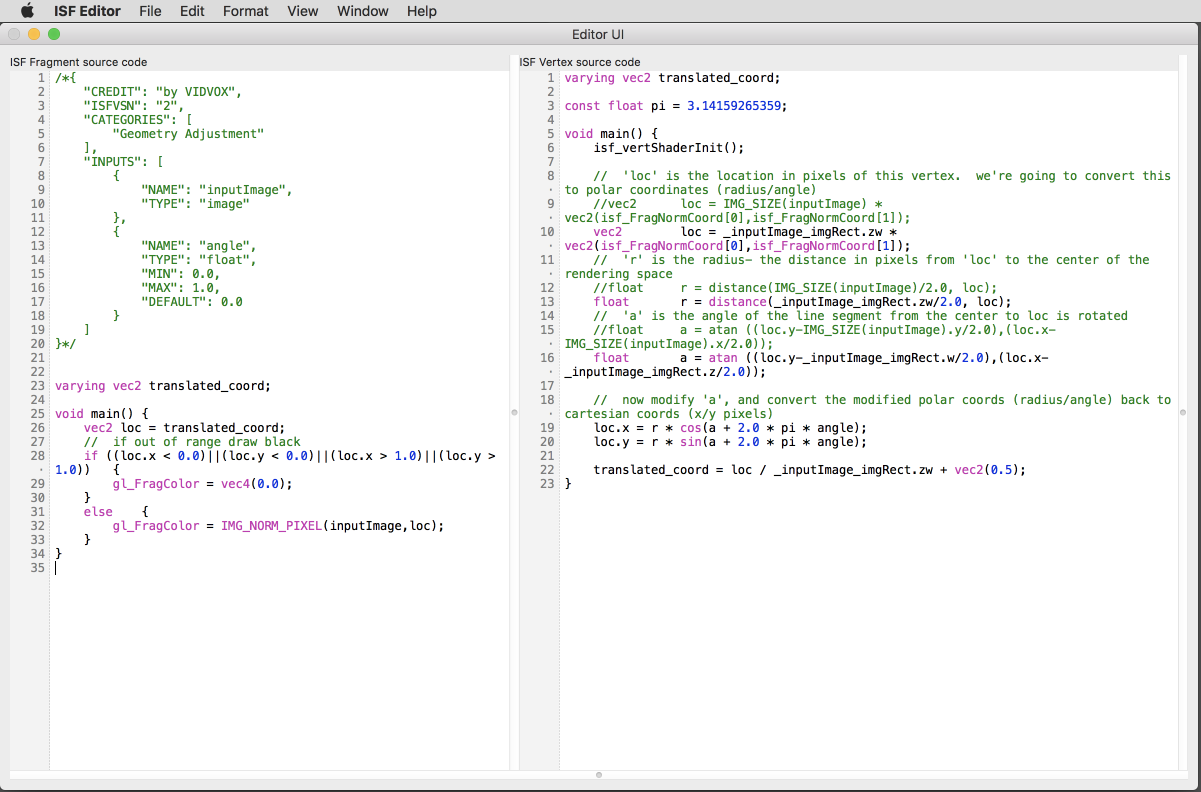 The convention for using a vertex shader within ISF is to simply create a file with the same name as your fragment shader but with a ".vs" extension.

Here we will create a pair of files called "passthru.fs" and "passthru.vs" as a starting point for an ISF that uses a vertex shader.

If you are using the ISF Editor for Mac or the web, instead of creating a new text file, simply go to the VS tab within the editor panel and save the document; the .vs file will automatically be created for you.

For the vertex shader, copy and paste the following code:

And it match up with a corresponding boring passthru.fs that looks like this:

The two important details here are:

Also note that any uniform variables declared in the JSON section of the fragment shader are also automatically available to the vertex shader.

While GLSL is incredibly powerful, some advanced composition ideas require combining the results of multiple shader compositions at different resolutions in order to create a final output. ISF adds a convention for creating shaders that have multiple render passes that can reference each other making it possible to make complex creations.

Like with other properties we have seen so far, setting up multiple render passes involves adding something to both our JSON blob and our GLSL code.

From the set of ISF Tests + Tutorial shaders is the "Test-MultiPassRendering.fs" example of using multiple render passes:

The three important details here are:

Another useful way that ISF extends GLSL is with persistent buffers which make it possible to retain image data between render passes.

Persistent buffers are an optional attribute that can be attached to any element in the PASSES section of the JSON blob.

From the set of ISF Tests + Tutorial shaders is the "Test-PersistentBuffer.fs" example of using persistent buffers:

In this code, the result of each execution of the shader is stored in "bufferVariableNameA", which is then used in the next pass. The "blurAmount" variable specifies how much to mix between the new pixel and the old one. This technique is often used to create feedback style effects.

Though not supported by all renderers, the optional FLOAT attribute can be included to create a 32-bit buffer. This will use up more memory but will store information more accurately between render passes.

Further discussion can be found in the ISF Primer chapter on persistent buffers including examples of creating feedback effects and a Conway's Game of Life in GLSL.

Shader with raw audio and FFT waveform inputs in the ISF Editor.

Though GLSL as a language has no concept of sound data, many developers have found ways to writes audio-visualizers by converting audio into a format that can be passed to shaders. As one of its extensions to the language, ISF includes a standard way for host software to pass in audio waveforms and FFT information for this purpose.

Like with image data, audio inputs are declared in the INPUTS section of the JSON blob with a special TYPE set to "audio" or "audioFFT". The ISF JSON Reference contains detailed information about the format in which this data is packed and available optional attributes.

From the "ISF tests+tutorials" is this simple audio visualizer shader. In addition to the declared waveImage audio input is an options for setting the wave size and output display style called waveSize.

To pass audio data into shaders, the audio samples are converted into pixel information and packed into an image. This image is then passed into the shader like any other. The IMG_SIZE() function can be used to get the dimensions. The the y-axis representing individual channels and x-axis contains the raw audio samples for each channel. From here, the IMG_NORM_PIXEL() or IMG_PIXEL() functions can be used to read the sample data.

The "audioFFT" type works in a similar fashion, with the results packed into an image where the y-axis representing individual channels and the x-axis holding the results for individual frequency bins.

Further discussion and examples can be found in the ISF Primer chapter on working with audio and audio FFTs.

In many cases, GLSL code can be easily adapted to ISF by adding the JSON blob and making a few minor changes to a few function and variable names.

For example, if you are coming from an environment like The Book of Shaders or Shader Toy, the variable that they use for the time in seconds might be something like u_time or iTime and you would simply need to change those to TIME to work in ISF.

Here is a list of tips that address many of the common differences:

Further discussion and examples can be found in the ISF Primer chapter on adapting existing GLSL code to the ISF specification.

This page was designed to demonstrate some of the core ideas of the Interactive Shader Format as quickly as possible - but there is a lot more to learn, both about ISF and GLSL.

Here are a few resources you may want to check out next: